Dr. Bo Sun Kim is a faculty member in the School of Education and Childhood Studies at Capilano University and a PSI pedagogist for ECPN. She holds a PhD and MA in curriculum and pedagogy from the University of British Columbia, Canada. Her professional interests focus on teachers’ pedagogical dispositions and life and children’s relations with worlds through their narratives and artistic languages. Her work engages with postmodern theories, poststructural theorists Gilles Deleuze and Félix Guattari, material feminist theories, and critical place-based pedagogy. 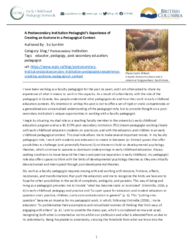 I have been working as a faculty pedagogist for the past six years, and I am often asked to share my experience of what it means to work in this capacity. As a result of unfamiliarity with the role of the pedagogist in Canada, few people understand what pedagogists do and how they work in early childhood education contexts. My intention in writing this post is not to offer a set of rigid or static competencies or a generalized and universalized understanding of the pedagogist role, but to provoke thought on a post-secondary institution’s unique opportunities in working with a faculty pedagogist.

My work as a faculty pedagogist requires staying with and working with tensions, frictions, affects, resistances, and transformations that push the educators and me to recognize the limits we face and to hope for other possibilities in the world of complexity, ambiguity, and paradox. This way of being and living as a pedagogist provokes me to trouble “what has become static or routinized” (Vintimilla, 2016, p. 4) in early childhood pedagogy and practice and “to open space for educators and student educators to question one’s practice, children, curriculum and education in general” (p. 4). This “putting-into-question” became an impetus for my pedagogist work, in which, following Vintimilla (2016), I invite educators “to problematize their assumptions and naturalized routines of thinking that limit ways of engaging with others” (p. 4). I aim to unsettle the status quo, which is considered normal and usual, recognizing both what is contained as norms within our profession and what is alienated from us due to its unfamiliarity. Being hospitable to uncertainty, crossing the threshold from what we know into the unknown, allows us to imagine otherwise and to create a space of pedagogical encounters and ambivalence that holds a creative potential and vitality.

For Sara Ahmed (2000), the term encounter suggests a meeting that involves surprise, conflict, and a giving up of any form of totality that governs the encounter. A pedagogist pays attention to an encounter’s conditions, which are speculated in terms of a transition zone in which transformation can occur. In this regard, a pedagogist carefully mediates an encounter. One of the critical conditions for encounters is creating space for a dialogue amongst educators about pedagogical values and commitments. Such a dialogue includes questions: What matters in our educational context? What do we desire collectively as educators? What are we profoundly concerned about in our current times? Engaging with these ethico-political questions opens up contemplating the things we care about and provokes thinking about other possibilities and alternatives. For me, an encounter is a spatial and temporal concept where an idea meets with other ideas, where a thought provokes other thoughts (Haraway, 2016), and where changes and transitions happen. It is a transitional zone.

A pedagogist ponders what it means to work with Otherness, with different zones of materiality and social relations, and to have ethical relationships. This pedagogical orientation is based on the belief that worlds are connected and we are intimately interconnected and interdependent with each other and things around us. In Natalie Knapp’s (2015) work, the term ecotone refers to a transition zone or boundary between fields and forest. Knapp explains that ecotone comes from a Greek word that combines Oikos (house) and tonos (elasticity). Ecotone, the transition zone, is essential from an ecological perspective due to its rich biodiversity. The border between fields and forest is singularized by unusually thriving botany because of this richness and the complex conditions of the area, which are vital for a region’s ecological system. Knapp points out that forests are communities where plants, animals, and other organisms are intertwined and depend on each other.

The old trees in a forest are deeply rooted in the ground, becoming a water source for young trees when they are thirsty. Also, the thick stems of old trees provide nests for animals. Because of these reasons, old trees should be preserved. There are different propositions in neighbouring grasslands. To flourish, fields need movement—they are regularly cut and are grazed by livestock. The transition zone between these two living communities creates new stimuli for both ecosystems. However, the ecotone is also an independent living area with a unique possibility in itself. Neither field nor forest, it is a transition between the forest and the field that constantly changes as it stimulates and influences the two ecosystems. The work of a pedagogist, figuratively speaking, creates an ecotone in a pedagogical context: a living area of transformation and hybridization. This transition zone is formed in the boundary area of encounters, bridging the different zones, webbing the material and social relations.

A pedagogist therefore needs to pay attention to shifting conditions, the inbetweenness where encounters between others occur. Working with a faculty pedagogist is a process of “becoming-with” (Haraway, 2016) each other. It involves affecting and being affected, resulting in contesting and disrupting taken-for-granted understandings of early childhood pedagogy practice. Challenging habituated modes of thought requires continuous engagement with difficult questions, moving beyond a familiar comfort zone to refuse “legitimation through mastery” and “narratives of linearity” (Land et al., 2000) to dwell and struggle in the space of uncertainty. A specificity I bring to my work as a faculty pedagogist is to seek to work with relationality and encounters in the ways Ahmed notes and as a way to rethink habituated modes of thought. In pedagogical encounters, we (students, educators and pedagogist) work relationally in an ongoing process of engagement and becoming. We consider what it means to be with and known through the other, which requires both imagining new questions and committing to different ways of asking questions. In these spaces of uncertainty, encounter, and relationality, we seek openings to new possibilities generated within interconnections and intra-activities as processes of engagement and transformation (Lenz Taguchi, 2010).

Like the ecotone, the pedagogical space of inbetweenness becomes a unique habitat for intervention and vitality. It cultivates our capacities and power to be in the complexities and unfamiliarity. Cultivation of the fullness of life and possibilities—which brings necessary tensions—is only possible through connections, disruptions, and interventions, through crossing boundaries and thresholds. These tensions become provocations that make the pedagogical space flexible and continually changing and renewing. In this sense, the pedagogist’s work perhaps calls for a response, transformations, and unexpected change to imagine alternative ways of being and living. Its mode of being is through suspecting and questioning taken-for-granted ways that organize our educational system and our pedagogical life and thinking about how we can mobilize our capacities to change the things that concern us the most. 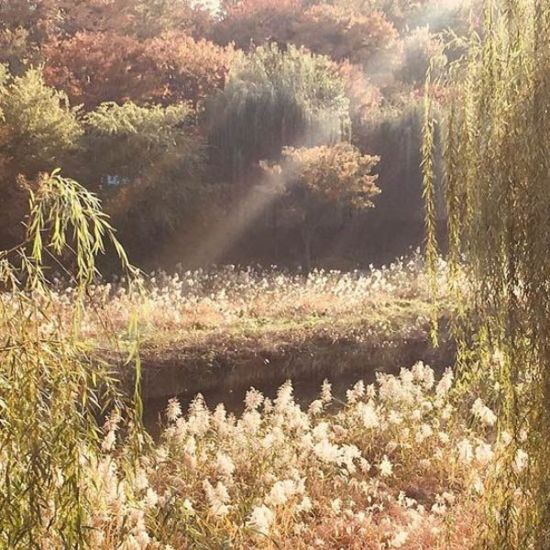 A border between a forest and a stream at Yangjaecheon, South Korea © boah