Living with a Pedagogista: Thinking Otherwise as an Early Childhood Educator

Two children fight over a toy. “I had it first!” “No, I had it first!” Before the argument can escalate and possibly become physical, I quickly attend to the situation without knowing its context. It does not matter whether I know the context, though, because as an educator, I feel I need to make sure that everyone is safe and happy. I approach the children and pull them apart to break up the fight. I suggest—or rather, tell—the children to each take a turn with the toy every ten minutes. I have solved the problem for these children. No one got hurt, and I think that today is a good day, as everyone is happy. I am a good educator.

Caught up in the rules, schedules, and routines of the early childhood classroom, constrained by time and dominated by efficiency and managerial logics, we gear ourselves up every day to sustain a system without friction—tears, fights, bruises, conflicts, or troubles—in the name of maintaining set rules and holding to an image of the good educator. However, I must question, what is this role that we are eager to accomplish and who is the good early childhood educator in this neoliberal society?

Early childhood education has had a long history of being perceived as women’s work (Grumet, 1988) and as glorified nanny work. As long as we take care or manage the children without friction, this is all that is required of us. In this notion, anyone can do this job as long as the classroom runs efficiently without tears, fights, and troubles. In this logic of efficiency, anyone who is able to be in control can replace me. Therefore, I am here, yet I do not exist. This presence does not require me to be me; it does not matter who keeps the room under control. Who I am does not matter. What I can bring into the classroom does not matter. I am only looked at through the tasks that are to be met, and my “specific uniqueness” (Arendt, p. 181) has no worth. In this, I become docile (Foucault, 1995) as this role does not ask me to be a singular me.

In Capilano University Children’s Centre, where I worked as an early childhood educator, we worked a little differently. We had the opportunity to work with a pedagogista, Dr. Cristina Delgado Vintimilla, for a number of years. The term pedagogista comes from Italy, and Cristina’s interdisciplinary work contributes pedagogically to educational projects (see Early Childhood Pedagogy Network, “Role of a Pedagogist”) and “is devoted to thinking about pedagogical possibilities” (Vintimilla, 2018, p. 21). Working with Cristina has constantly asked us, the educators at the children’s centre, to see who we are and who might we become, who might a child be, where we live, and what situation we live in. It has called us to “give the alterity and integrity of the world a place in [our lives]” (Biesta, 2017, p. 8), which has enriched our way of becoming in the world. We have been provoked to pause and let go of being in control and managing the classroom, and instead to question many ways of living and taken-for-granted discourses in early childhood education. In this sense, working with Cristina has taught me, in moments like the earlier vignette, to pause. To have what Anne Phelan (2015) refers to as “second thoughts,” which invite us to “[free] ourselves from memories that entangle us so that they can be reconsidered” (p. 5). This pause allows me to step away from the need to constantly manage a problem-free room, or to teach children how to behave properly based on child psychology, or to fixate on fulfilling the discourse of the good or quality educator (Dahlberg et al., 2013). Rather, we are to recognize the classroom as a living place. Here, I am asked to pause with second thoughts and face what is of concern in a classroom encounter (Phelan, 2015). We work with the concern together with the children, where I am fully present with them, not as a manager of the situation and of the children, but meeting them in this present moment.

Working with a pedagogista has not been a remedy, a redemption, or a panacea. Such a way of troubling and questioning our practice and the convenience of managerial logics is difficult and demanding. Many days, I almost instinctively try to control the classroom and respond to situations with a well-engrained approach to managing behaviour. Then, Cristina’s voice is in my head asking me to pause. Second thoughts emerge, with the possibility to ponder and think pedagogically about what I am producing and under what educational purpose. Such pause allows me the possibility to notice pedagogical encounters with children and to bring possibilities of otherwise: other than teaching conflict resolution skills, other than teaching children how to read, other than preparing children for kindergarten, and other than all the skill sets that are deemed necessary under child developmental psychology. Seeking to be a good educator no longer becomes my priority to fulfill, as the notion of good itself becomes ambiguous. This is certainly not about escaping from the world we live in, out of discourse and out of control, as if that makes everything fine. This is what working with the pedagogista Cristina has gifted me, awakening me, so my work as an early childhood educator is worthwhile (Jardine, 2008). 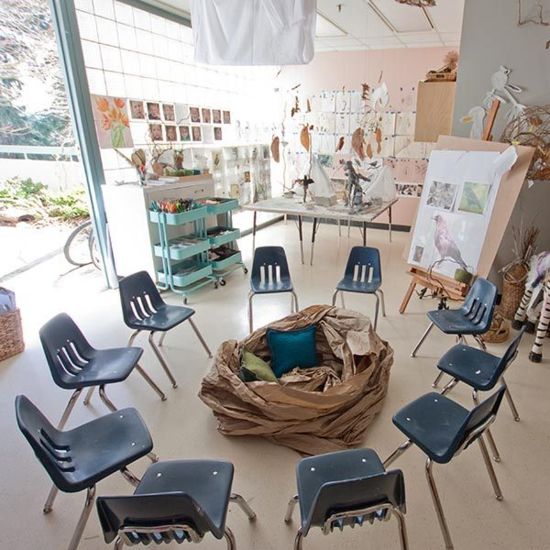